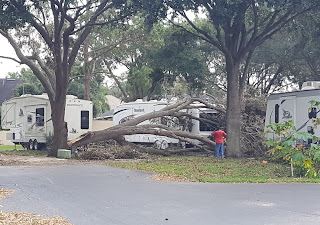 This picture was taken today, after the roads are pretty much cleared here in the park.

I can't tell you how many times we absently hit light switches, just to be reminded we had no power. The park we live in has a rec hall with a gas stove. The park paid for ingredients, and three ladies who live here made a spaghetti dinner on Monday night. It was the only warm food we'd have that day. We were told to come back Tuesday night for burgers and hot dogs, again paid for by the park. With hot food in our tummies, our moods were much improved. By dinner, we had cleared out a whole lot of our own debris and the place was looking much better. Still no power, but at least we were fed.
At exactly 12:50 am Tuesday, our heads shot up at the sound of our air conditioner coming on. It's right under our bedroom window, and let me tell you it was the most wonderful sound. We jumped out of bed and ran around closing all the windows and turning on the ceiling fan. Then I heard the refrigerator running. The second most glorious sound. We were like little kids running around grinning. I finally got to sleep once the house cooled down. I don't think I've ever been so happy for those noises in my life.
On Tuesday we went to check on my partner's customers' properties on the other side of town. The development had been too flooded near the front gate to get into Monday afternoon. When we drove in we could see the high water marks on the roads and golf courses. Some houses looked like nothing had happened, others had parts of roofs ripped off. There were carports and storage sheds mangled or destroyed, but the houses themselves seemed solid and there was no water inside, thank goodness. Like our place, there were downed trees and debris everywhere.
I feel very blessed to have everyone in my family safe and sound, with homes they can still live in. We are grateful that our friend Carolyn shared her place at Westgate Palace Resort in Orlando with us during the storm. Every single staff member at Westgate was very helpful and pleasant, even when they were under a lot of stress. Our RV park fed us when we had no power. Our friends kept positive thoughts and prayed for us. Lakeland Electric has been working around the clock trying to get everyone's power back on and our lives back to normal.
All in all, we were lucky.
Let's not do this again for a long time, okay?

Posted by Unknown at 1:45 PM No comments: