Hurricane season is more than the title of my first book. The book was inspired by the annual hurricane season we have here in Florida which officially begins June 1 and goes through November 30. Yes, that's six months--half a year--under hurricane possibility.

I grew up mostly in Florida, Southwest Florida in particular and in a town called North Fort Myers which lies along the north bank of the mile-wide Caloosahatchee River. We lived in a mobile home on a lot my grandparents owned which was close enough to the river that you could easily see it, and if you were a major league pitcher, you could probably throw a baseball into it. My mom's dad and his siblings owned several lots at the end of a road that ended at that river. Every year my great aunts and uncles would come down to their little cracker-style houses for the winter and it was like a big family reunion. They came down right after Christmas and always left before Easter, so they were never in Florida for hurricanes while I lived there.

That wasn't always so. Back in the "old days" before they bought all that land for the family compound, they came every year after harvest in Kentucky to Sanibel Island. The guys camped out all winter while the most of the women stayed in the one of the local boarding homes. The boys and men in the family all fished or worked locally to earn money during the winter. That's my granddaddy in the middle with two of my uncles. 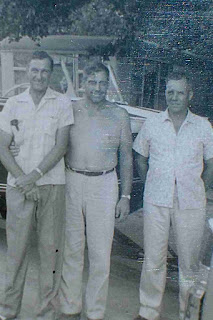 One year when my mom was still quite young, they were on Sanibel as a family when a late-season hurricane struck. My mom told the story about how her dad tied her and her mom to palm trees to keep them from blowing away during the storm. The story goes that it was that storm that made my great-grandfather decide that they needed to move inland for safety. That's when the family bought that property on the north side of the Caloosahatchee. He was being extra careful so they could evacuate safely if they needed to.

The first year we were living in that mobile home on the North Fort Myers property, a hurricane struck. It wasn't fun. The winds rocked that trailer, even though it was tied down. Mom had all of us kids lying on the floor during the worst of it and we told stories and sang songs to keep our minds off the howling wind and heavy rain that was going on outside. Due to storm surge, river water was knee deep outside our house for quite a while after the storm was gone, so Dad had to put on rubber boots and carry us out to the car when we went anywhere. I particularly remember some guys in pickup trucks who came down our road hunting snakes. They had dead cottonmouths and rattlesnakes laid across the hood that they said they killed just up the road along the canal. To a kid (me), it was quite scary and the image has stuck with me all these years.

By the time I was a teenager, we were living in Estero, which was back then barely a wide spot in the road south of Fort Myers. My father had become an ordained minister and was pastor of the Estero First Baptist Church. Our church building was made of cement block and designated a hurricane shelter, so when another one was coming, we moved all our important papers and so forth from our house into Dad's office and we opened the church up for shelter. Mom emptied the contents of our fridge and freezer and she and some other ladies used the church kitchen to cook up every single thing we had so we could feed people who sheltered with us. The only luxury we had was taking turns napping on the sofa in Dad's office during the night. A radio ran constantly with updates on the location of the storm, and Dad put me in charge of charting the longitude and latitude they announced frequently on a chart the newspaper had published just days prior so everyone would know where the storm was.

The last major hurricane I went through was Hurricane Wilma in 2005 (http://www.nhc.noaa.gov/outreach/history/#wilma). I lived in a ground floor apartment in Fort Myers with my little Yorkie, Mija. Mom would've been proud of me. I had frozen gallon jugs of water and cooked everything in my freezer, since I knew cooked items kept better than raw. I had bags of ice stowed in my freezer. I had things I could eat that didn't need cooking. I had a first aid kit, lots of dog food, and had refilled my meds, all kept in zipped up plastic bags. I had a full tool kit including heavy gloves (in case of broken glass), plastic sheeting to cover windows, and heavy duty tape to hold it on. I had battery powered fans and a little battery powered television, with tons of batteries. I had my laptop and cell phone all charged up, and left plugged in until the power went out. I even made sure I did all the laundry and took a nice warm shower and washed my hair and made myself as comfortable as I could. Yes, I knew I was ready. I wasn't scared, but I knew if that storm started getting worse than we thought it was going to be, I was going to have to make a run for it to my brother's house, which was on the other side of the river and made of cement blocks. He also had a generator for his wife's oxygen machine.

I didn't go to my brother's. By the time it worsened it was too late to chance driving across the river, so Mija and I rode it out alone in our apartment. I had pulled my car up as close as I could to my bedroom window to protect it both my car and that window. Halfway through the storm, everything calmed down as part of the eye passed over in the dark. Still had power and trees were still upright. Yes! But then the other side of the storm struck and the wind came from the opposite direction. That's when the real damage happened and we lost power. I was lucky my apartment didn't flood and my car was safe. But the tree right outside my front door fell right where my car would have been if I hadn't moved it. When the storm was over and daylight came, I could see a huge tree across the green belt had come down, its root feet sticking up and a huge hole gaped where it had lived for probably a hundred years. Some other residents weren't quite so lucky when that tree fell on their cars. If I remember correctly, only one local man died. The story was that he was in a shelter and was stupid enough to go outside for a cigarette during the storm.

By the time I went through Wilma, I was already a writer. I wrote emails to my friends and kept a hurricane diary on my laptop during the storm so I could remember what it was like. A little bit of that wound up in Hurricane Season. 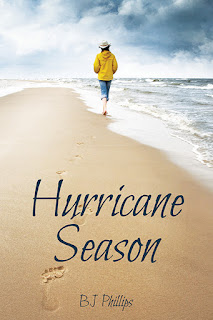 As you can see, hurricanes are part of my family lore. We all survived them. Loss of power or other inconveniences were just that--inconveniences. Okay, they were very uncomfortable inconveniences. But as Mom and Dad always said, as long as all of us were safe, that's all that mattered.

Thanks Mom and Dad, you trained us well.