Yes, we do have seasons here in Florida. We have the usual: winter, spring, fall, summer. But we have other seasons, too. We previously mentioned hurricane season, but another one is Snowbird Season.

Snowbird Season is defined by the time the northerners come down here for the winter, and when they go back. Around here, it generally starts in October or November and ends no later than the beginning of May. The beginning date depends on how bad the cold weather gets wherever they come from and how soon. The ending...same thing. They aren't going home until the snow is gone.

We live in an honest to goodness resort. It says so on the sign out front that includes the words RV. Yep, an RV resort. We live in a stationary home - a small manufactured cottage that was built to fit onto an RV lot. It's called a Park Model. Everything is built in, as if it was an RV. But it's not. We added onto ours, giving us an extra room and a really nice big covered porch. Maybe fifteen percent of this place has houses similar to ours, and a lot of them are Snowbird-owned. Not us. We live here year round.

But we're in the minority here. Right now, in the summer, the park is fairly empty. Most of the place is taken up with spots for recreational vehicles, or RV's. These are mostly not the little trailers or pop-up campers you see people pulling along the interstate with cars or suv's, although we do get a few coming and going. No, these are the expensive Class A things that look like huge buses with slide-outs that make them even bigger inside.

The other RV's we get a lot of are called Fifth Wheels. They are those big things towed behind heavy duty trucks with special hitches resembling those of commercial trucks that take up their beds. 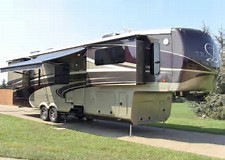 These people are not campers in the traditional sense. They practically live in those things. Some have washers and dryers and even a second bathroom.

We love our Snowbirds. They come in lots of shapes and sizes and from all over the United States and Canada. They're fun people who just like to be where the weather is better.

I grew up in southwest Florida, where the annual influx of Snowbirds was extremely noticeable. Suddenly it was harder to get a table at a restaurant, especially if you wanted to eat at a reasonable time. It was more crowded at the grocery store. The roads were clogged with those huge cars that older people drove back then, and we had to endure their slow driving and failure to use turn signals. We always assumed they were lost and would turn or stop suddenly, which they did a lot.

Today's Snowbird is rather different. I think they look younger than they used to (maybe that's because I'm older?). Yeah, they still seem to like those early bird specials at the restaurants. But now they drive smaller cars and they drive faster. Ours seem to like karaoke and line dancing. In the winter months here at the RV park, there's a quilters club and several card clubs, but there's a bicycling group as well, not to mention the Disney annual pass owners (we aren't far from Orlando). Snowbirds are not what they used to be--at least not around here.

In other places, Snowbirds own or rent condos, mobile homes, or cottages on the beach, and I'm sure there are some in this area that do the same. But ours are special, especially to us. They are friends that only live here five or so months per year - and a lot of them bring their houses with them!

Right now, as I said, the few of us who live here year round pretty much have the place to ourselves except for the summer campers who come on vacation. In a few months, though, our Snowbirds will start flying south again and the place will fill up. The activities and group trips will be posted again outside the rec hall or on fliers in our mail boxes. Friday nights will mean concerts or karaoke in the rec hall, and there will be pot lucks and other gatherings. We'll welcome them back with open arms and hugs and enjoy them until it's time for them to fly away again.
Posted by Unknown at 10:12 AM